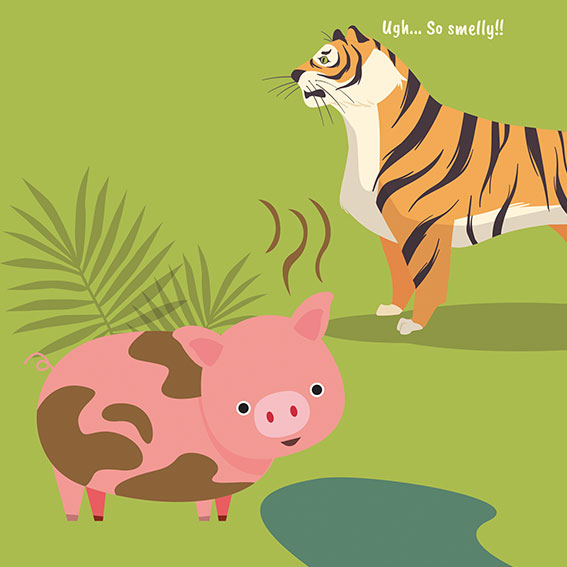 Once upon a time, there lived a tiger in India. One day it was hungry. It went out to catch a cow. When it caught the cow, it sat under a tree to eat it. The cow was very good. The tiger liked eating it. After eating the cow, it became very full. The tiger became thirsty too.

So the tiger went to a pond. It wanted to drink some water. There was a pig at the pond. It was drinking water too. When it saw the tiger coming, it felt very afraid. It was so afraid that it forgot to run!

The pig saw the tiger going away. It thought, “The tiger must be afraid of me!”

The pig felt very strong. It ran to the tiger.

The tiger was still full after eating a cow.

The pig thought the tiger was really afraid of it.

The pig was very happy. It went back to its family. It told them what happened. The other pigs heard the story. They knew the pig was wrong.

thirsty – the need to drink water
pond – a small lake, a small area of water
happen – something that took earlier
Click here to download the audio
9
Share: