The Magic Fox And The Young Prince Part 1 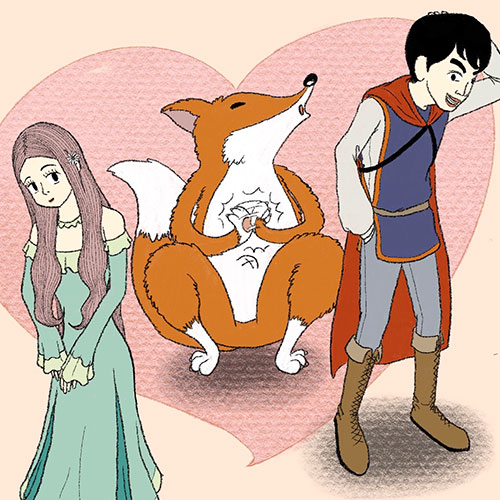 Once upon a time, there lived a king and his three sons. The king was very old and weak. He could not go out hunting or riding or even go to church on Sundays.

He built a church in his castle. When the church was completed, he went to pray. A bird sat on the church tower and sang a beautiful tune. When the old king heard the bird’s song, he magically turned into a young man! He was no longer old and weak.

He asked his eldest son to catch the bird. The son climbed to the top of the tower to try but as soon as he tried to grab it, the bird flew away. The prince watched as the bird flew into a forest.

He went back to see his father. The old king had turned back into an old man because he could not hear the bird’s singing. He only became a young man when he heard it sing.

“Father, I saw where the bird went. I will go and catch it for you,” said the eldest prince.

“Come back quickly with the bird,” said the old king.

The prince rode to the forest on his horse together with his dog. When he reached the forest the sun was just setting. So he built a fire and prepared his supper. As he was eating, he suddenly saw a fox. He told his dog, “Go catch that fox!”

Before the dog could even chase the fox, the fox said, “May you and your dog turn to stone!” and that was what happened! The prince, his dog and horse turned into big stones.

The next day, the bird came back to the church tower and sang. The king became young again and asked his second son to catch it. As the second prince climbed up the tower, the bird flew away into the forest again.

The second prince followed it with his dog. At sunset he stopped at the same spot as his older brother. As he ate his supper, he saw the fox too. “Go catch that fox, dog!” he told his dog. Again, the fox turned the prince and his dog into stone!