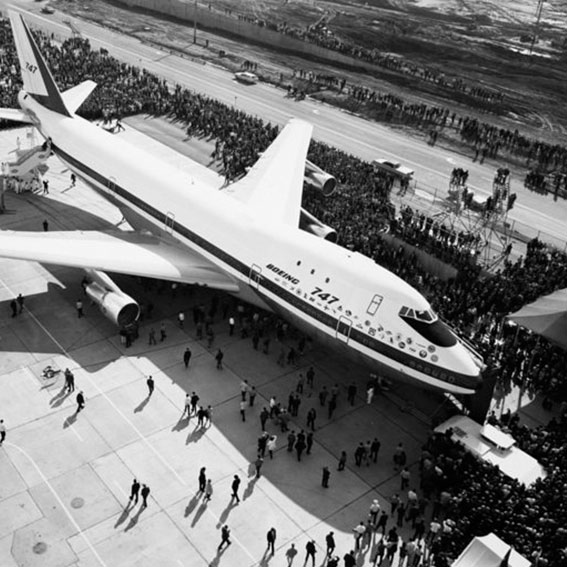 In the early days of aeroplanes and flying, only the rich could buy aeroplane tickets. That changed in the 1960s when airlines started to offer cheaper tickets so more people could fly. It was a great feeling to fly from place to place instead of being stuck in a bus or train for hours and hours.

The president of Pan Am, the biggest airline in the USA, wanted a super large plane. So he asked Boeing (which made planes) to make one. The plane he wanted was to be twice as big as the biggest plane at that time! If Pan Am could carry more people at one time, they would save money and make more money too.

Boeing agreed to make such a plane. The problem was, no one knew how to build it. Worse, they only had 28 months to complete the project.

The 747 was also designed to carry large payloads. The best way to put that in the aeroplane was through the nose of the aeroplane. The designers thought over the problem of the pilot’s cockpit where he sat until someone thought to put it on top of the plane. This gave the 747 its famous “bump”.

Surely, such a big and heavy plane could not get off the ground. To solve this problem, Boeing’s engineers had to design a new type of wing – one that could take the weight of such a big plane. Jet engine makers Pratt & Whitney worked on a new engine that was more powerful yet used less petrol. The large 747 would need four such engines instead of two.