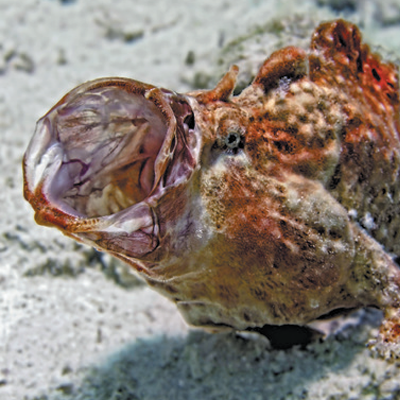 The frogfish is a master of disguise. Like ninjas, these fish can blend in with their background completely. In fact, they do it so well, they really appear to be a rock or part of a coral covered with seaweed.

Frogfish come in a variety of colours, shapes and sizes. Hairy or stripey frogfish are able to mimic or copy algae and soft corals, even having their hairs move with the sea current. Occasionally they can also mimic venomous black urchins to keep predators away. Juvenile painted frogfish can also mimic toxic nudibranchs to deter predators. This form of mimicry is called Batesian mimicry. Here, a creature which is harmless, imitates the warning signals of a harmful species. So, they have little to fear from their natural predators.

It also gives them an ambush advantage over their prey, who ignore them, thinking they are harmless nudibranchs.

No two frogfish are identical. This is because they have the ability to change with the surroundings just like a chameleon. However, unlike the chameleon, the frogfish cannot change their colours quickly. In fact, it takes several weeks for them to match their surroundings! Therefore, they don’t move around from place to place regularly as it would take too much time to blend in. They also have unique spines and bumps that change according to their surroundings. Their varied texture aids them in their camouflage. This helps them to catch their prey.

Taking a closer look at the frogfish, you will notice its tiny eyes closely joined together at the front of its head. Above it is a modified dorsal fin that hangs over its mouth that works like a retractable lure or bait. The frogfish is a type of anglerfish which baits its prey much like an angler. The lure may be shaped to resemble either a shrimp, worm, smaller fish or even a baby squid. The frogfish can wriggle this extra appendage around, making it look like a living sea creature – the perfect bait to catch fish! The lure is also biofluorescent, which means it can glow in the dark. On top of that, if the lure is eaten or damaged, the frogfish can grow another one.