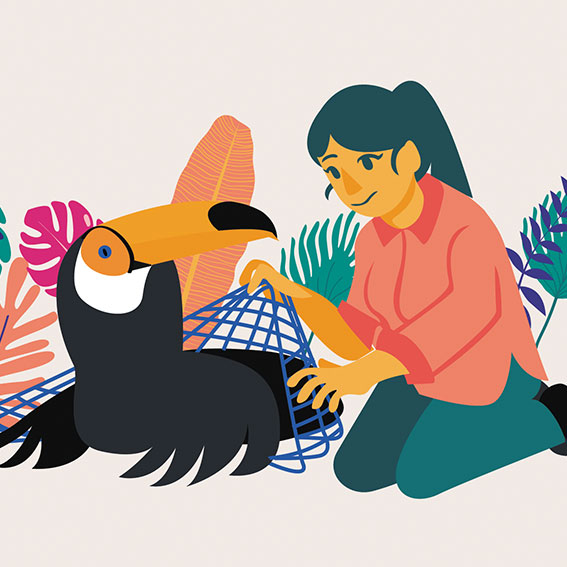 There once was a young woman who lived on top of a mountain with her father who was a woodcutter. She had many brothers and sisters. She made a living selling firewood at a nearby village. One day after coming back from the village, she heard a rustling sound.

Quietly, she went to have a look.

“It’s a hornbill. A hornbill is caught in a net.”

The young woman felt sorry for the hornbill. She tried to take the net off the bird. And then, a hunter appeared.

“You dare steal my game?” he said. The hunter looked at the young lady angrily.

“No, no, I am saving it. Can you please set it free? If not, I have money here. Please sell the bird to me. I want to set it free.”

The woman handed the hunter her hard day’s earnings.

He accepted it. She quickly set the hornbill free. The hornbill sang happily and flew around in big circles over the girl’s head Then it disappeared into the sky.

The next day a handsome man whom she had never seen before appeared at her house. With him was a group of people, equally dressed in fancy clothes. At first glance, she knew he was a king of sorts, dressed in very nice fine clothing. He wore a strange crown on his head.

“Please, can I make you my bride?” the king asked.

The girl was dumbfounded.

“Of course not. As you can see I am the daughter of a poor woodcutter. What would a king like you want with me?” she said wondering how he even knew about her.

At that moment, her father came out of the hut. He was surprised to see the royal procession.

When the young king explained his intentions, the father looked hopefully to his daughter. Realising that being with the king would help her family, she agreed.

So, they followed the entourage back to the palace. Now she was told that his kingdom was very far off – more than a day’s journey. So, she slept in the chariot the king had provided for her.

When she woke up in the morning, she was in a huge room.

“Breakfast is ready,” one of the servants called.

Downstairs in one of the many halls, she was led into a huge dining room laden with food. Her family was there too. Together they enjoyed a meal and ate as much as they could because they had never seen so much food before in their lives.

The king told them many amazing tales. One tale caught her attention. It was about a man who had fallen in love with a woman. One day, he discovered she was a crane in disguise. Since she had been discovered, she left the man.

game – small animals hunted e.g. birds
earnings – money got by working or for services.
procession – lines of people or vehicles moving forward in an orderly fashion.
laden – heavily loaded or weighed down.
Click here to download the audio
14
Share: