Dining In The Forbidden City 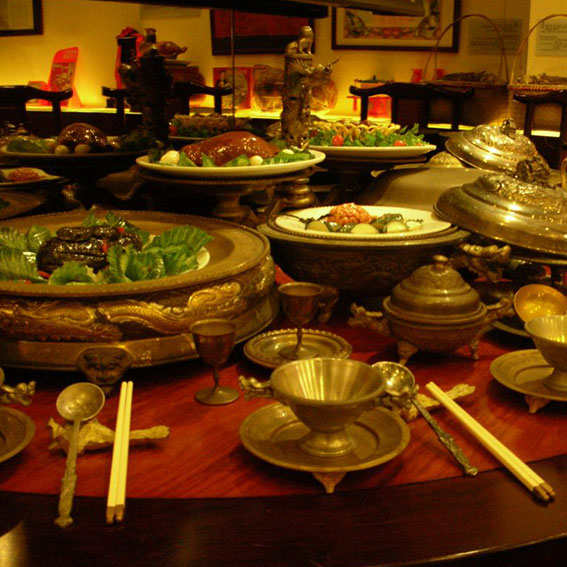 Before the Ming and Qing dynasties, meals eaten in the Forbidden City were copied from the Mongolians. The Forbidden City was a palace for the emperor (the king of China). People were not allowed to enter it. During the Ming and the Qing dynasties, health became important during meals. The emperors began to eat healthily. So, their meals had more grains like beans and rice instead of meat.

The emperor usually ate alone except during special ceremonies. The palace rule was that everyone had to stand when the emperor was in the room. Even if they were invited to take part in his meals with him, they had to stand!

Each part had one chef, five cooks, a manager and a person who controlled the money, called an accountant. The accountant would watch the spending and price of food. Every menu which was served to the emperor had the cooks’ names. If anything was suspicious, it would be easy to find the cook. More than 200 cooks, helpers and workers worked in the Imperial Kitchen!

Everything that the emperor ate was made fresh on the spot. There were no fast food or leftovers. The menu of the imperial dishes changed daily and were never cooked again! Menus for each and every meal had to be given to the palace before they were prepared. Every single menu was kept properly in the kitchen’s library.

Emperors were afraid all the time of being murdered. The emperors tested the food for poison using a small silver plate. The plate would change colour if the food had been poisoned. If he was still not sure that the food was safe, he would tell the worker who served him to taste the dishes first.

dynasty (n) – time when a certain family ruled the country
ceremony (n) – a formal, religious event
suspicious (adj) – not sure if something is safe or good
murder (v) – to kill someone, the crime of killing
Click here to download the audio
171
Share: