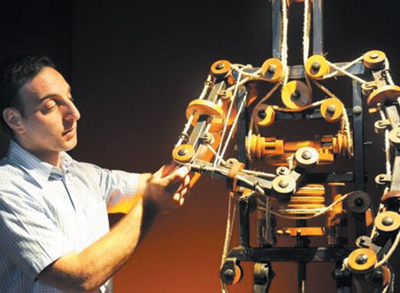 What is the first thing that comes to mind when you think about robots? Robots are machines that may be designed to look like humans and can copy our behaviour.

Robots can also perform difficult and complex actions and show a high degree of intelligence. We think of robots as being advanced and a part of our future. It is no wonder that we see plenty of these machines in stories and movies about science fiction. However, robots can be found as early as history itself. These early robots, as we will discover, are known as automatons.

An automaton is a machine built to perform an arranged set of operations. These machines create the illusion that they are moving by themselves. The word automaton is Greek, and means “acting of one’s will.” The first automatons were built in ancient Greece, and were usually powered by steam or water. These examples included a water clock and a water bowl with singing metal birds

In the ancient days, having your own automaton suggested a sense of power and wealth. Inventors were often asked to create new and better machines for their kings, rulers and sometimes rich families. During the Middle Ages, clockwork animals were very popular. There were mechanical lions and tigers that roared and moved for kings. In 8th century Baghdad, singing clockwork birds sat on silver and golden trees. The first wind-powered statues were built there as well, where they stood watch over the city gates.

The Renaissance period showed a great interest in automatons. Many clockwork machines were built and placed in the homes of central Europe. The famous inventor Leonardo da Vinci was said to have created a number of incredible automatons. One was a mechanical lion built for King Louis XII of France. It could roar, walk and stand on its back legs. Da Vinci also made a knight around the year 1495. This knight was human sized and could sit, stand and move its helmet and arms.

By the 17th century, people were becoming more fascinated by the idea of automatons. They wanted to see intelligent machines that could imitate human behaviour. In 1770, a chess-playing machine was introduced in the royal court of Vienna, Austria. The machine was called The Turk, and it looked like a wooden man seated at a chessboard. The Turk defeated many of its opponents, including Benjamin Franklin and Napoleon. It even travelled the world and became a huge attraction.

advanced – more complex, far ahead in progress
illusion – something not real that looks real
imitate – to copy a person or their behaviour
attraction – something that draws people
Click here to download the Activity Sheet
276
Share: