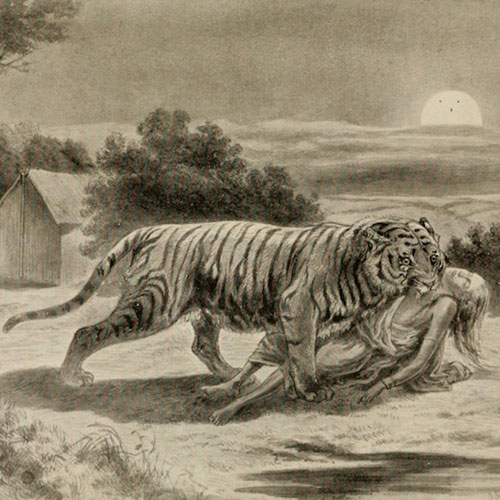 Out in the vast plains of Africa, there are plenty of animals. Anyone visiting an African safari will be able to see the cycle of life as it unfolds before their eyes. A peaceful scene of gazelles grazing can suddenly be disrupted by chaos as a pride of lions descends upon them. In a flash, gazelles are running helter skelter, not knowing which direction the lions are coming from. There is panic. Meanwhile, the lions have chosen their prey and is focused on catching it. The hunt is usually over in a matter of seconds.

A person watching lions hunting should be wary of the powerful beasts because lions are man-eaters! Animals do not usually hunt humans. Only a few do, such as lions.

The most famous lions to hunt people for food were the Tsavo Man-Eaters. In 1898, the British were building a railway bridge over the Tsavo River in Kenya. They hired a few thousand workers from India. One night, a young male lion entered the camp and killed one of the workers. It dragged its victim away into the darkness. Soon, there were more killings. Worse, there wasn’t one but two lions entering the camp to kill the workers.

Work on the project was greatly affected because many workers fled the area. Campfires and thorn fences were put up but the lions continued their killing. It seems 135 people were killed and eaten by the lions while many more were injured by them.

A famous hunter named John Henry Patterson ended the problem after he successfully killed the two man-eating lions. The first lion was shot in its leg. Even though it was injured, it still came into the camp that night to kill a worker. It even looked for the hunter! The next morning, the hunter tracked the lion and shot it with a powerful rifle.