Andy Ayam And The Internet News 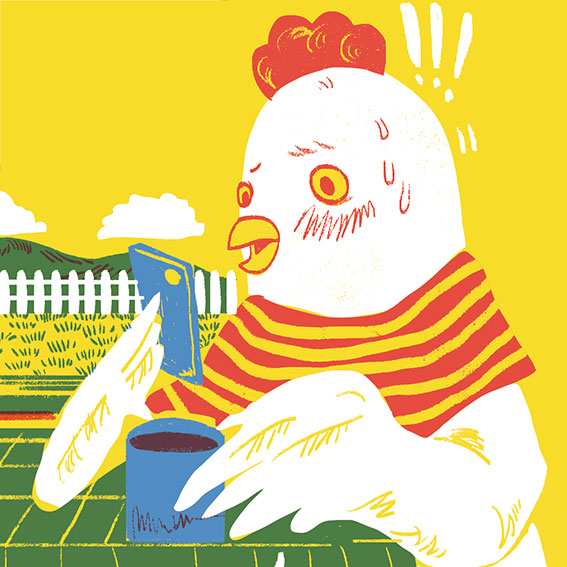 This is a story about a chicken named Andy Ayam. Andy lived in a little chicken coop on a farm. He was a pretty normal chicken. Every morning, he would pull out his smartphone to read the news while having breakfast. One day, he saw a story with a scary headline. It said “A Hurricane Is Coming!”. He was so scared that he dropped his phone into his coffee. Plop!

“I have to tell everyone!” Andy shouted.

First, he emailed the story to a thousand of his closest friends. The chicken had many friends. Then he ran outside to warn everyone else. The first person he met was Ina Itik the duck. She was just back from the market.

“Good morning, Andy!” said Ina. “Where are you going? Why the hurry?”

“Really? How do you know?” asked Ina.

“I saw it on the internet!” he answered hurriedly.

“On the internet?! Then it must be true!” said Ina. Andy Ayam and Ina ran together down the road to the local pool.

When they reached the pool, they met Toya the turkey. He was having a swim.

“Hello, you two!” said Toya. “Where are you going? Why are you so scared?”

“Really? How do you know?” asked Toya.

“I saw it on the internet!” said Andy.

So, Andy Ayam, Ina Itik, and Toya Turkey ran together down the road to the park.

When they reached the park, they meet Angeline Angsa. She was practicing for a concert.

“Hello everyone!” said Angeline. “Where are you going? Why are you so scared?”

“A Hurricane is coming. A HURRICANE IS COMING!” everyone shouted together.

“Really? How do you know?” asked Angeline.

“WE SAW IT ON THE INTERNET!” they said in unison.

“Goodness gracious! It must be true!” said Angeline.

So the four ran down the road together. They stopped at a cybercafe.

Inside they met Musang the fox. Musang was sitting at the cafe, writing on a desktop computer.