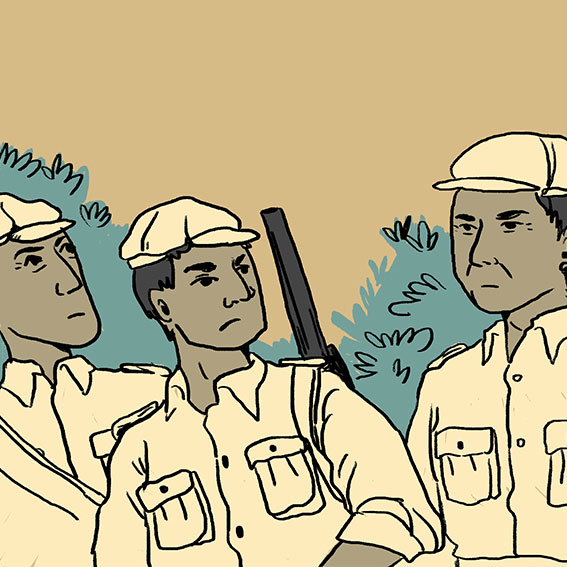 He gave his mother a toothy grin before running out of the house to go to the river. His friends were already waiting for him.

“Ali! No! You haven’t finished your homework!” His mother came out of the kitchen where she was in the midst of preparing dinner.

“Later, Ma! Later!” Ali gave his mother a kiss and laughed while running away just as his mother’s slipper missed him. He loved his mama but he had promised his friends, and a promise is a promise!

Ali ran past his friends’ houses before getting to the river. The river was far off from the kampong where they all lived. Ah Chuan and Muthu would already be there fishing with their hands. Ali laughed at the thought of it.

Almost there, Ali thought to himself but when he got there, there was no happy laughter to be heard. Where was Ah Chuan’s snorting laughter? Where was Muthu and his curly hair? Ali was not sure.

Not a sound. No one answered him. Worried, Ali immediately ran to the nearest tree and climbed it. He had heard about this from his parents –  some outsiders were trying to get the village people to “choose a side”. He did not know what it meant exactly but he had seen the grim faces of his parents. It must have been something serious.

These were the days before Merdeka – the independence of Malaya. In those days, the communist soldiers hid in the jungles and came out to steal food from villages. They killed villagers who did not like them. The police did their best to protect the people.

Ali heard some rustling in the leaves above him and before he could do anything, a hand came over his mouth to hush him.

“Quiet, Ali, they will hear you,” a voice said softly. Ali’s eyes opened bigger but he was happy when he recognised the voice.

“Muthu, why are you here? Where is Ah Chuan? I was worried!” he said softy back.

“Ah Chuan is down there. Look Ali, look!” Muthu said.

Ali’s gaze followed Muthu’s finger that was pointing at some plants. It was a bit difficult to see but Ali could see Ah Chuan hiding behind the plants. Ah Chuan had always loved playing in the dirt and he had covered himself with it. Clever Ah Chuan!

“Ah Chuan could not climb fast enough and so he hid there.” Muthu explained to Ali. Muthu’s family job was climbing coconut trees and so he was good at this.

“Who are we hiding from Muthu?”

“The soldiers we heard about. The ones that will take you away and eat you! I heard my ah-ma saying that to a neighbour!”

“That’s not true! Nobody will eat us!”

“It is true! They will shoot you if you do not follow them and eat you!”

Just before Ali was about to tell Muthu that that was impossible, they both heard the rustling of some plants. They looked to see if it was Ah Chuan but it was not. It was two men who appeared below them.

“Is that the village, soldier?”

“Yes, General. They have food and water. It will be the perfect place to take over.”

“Wonderful, soldier! Good scouting. We will attack them when they sleep tonight. Let’s go.”

snort – to force air violently through the nose with a rough harsh sound
grim – sad, unhappy
independence – the freedom from being ruled by another country
rustling – sound of leaves moving
Click here to download the audio
130
Share: